Thank you for your support

Able Timber & Hardware closed its doors to the public on June 30, 2013.
The Able family would like to thank all of its loyal customers over the past 38 years for trusting us with your business. We know the success and longevity of our business has been because of you.
We wish you and your family peace and prosperity and hope to see you again some time. 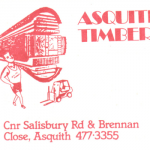 In 1976, three brothers, Tom, Fred and John Sassin, began a business called Sassin Brothers.  The brothers sold second-hand timber recovered from building demolitions.  Their hard work paid off over the years and they branched out into selling new timber exclusively.  The business continued to grow with a great team of staff, mostly extended family and developed into a building supplies business by the early 1980’s and renamed Asquith Timber.

In 1985, a small building in Mt Colah, a 10 minute drive north of the Asquith site, was established as a hardware store: Able Hardware.  Within only a couple of years, the hardware business had taken off and by 1990, it was able to support a full team of staff.  Timber was being supplied out of Asquith site and all other building supplies were being supplied from the Mt Colah Site, with Harry Hanna (Tom’s son-in-law) as the store manager. 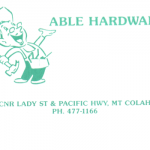 In 1988, the Asquith site was leased to MLM Timber for 3 years and all the brothers worked full time at the Mt Colah site.  The Mt Colah store was very successful, establishing itself as the dominant building supplies provider of the upper north shore.  At the end of the 3 year lease, MLM vacated the Asquith premises and the brothers moved back in.  This time, the site was converted to also have a large indoor showroom for hardware supplies.  The two sites were run in parallel for a few of years until 1994, when the Mt Colah site was sold and the businesses were consolidated into the Asquith premises.  The business was renamed Able Timber & Hardware, and has retained that name until this day.

The three brothers have since passed away and are very much missed.  Today, Anthony  (Tom’s son) and Harry are co-managers of the business.

The family recognises the hard work and dedication of all those who have worked at “The Yard”, as it is affectionately known, and appreciate the loyalty and support of its customers, many of whom have been with the company for over 30 years.